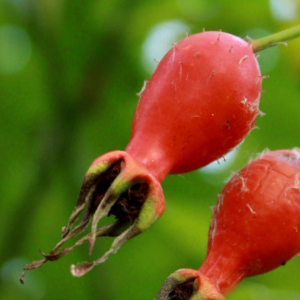 Roses are generally chosen on the basis of the shape, colour and scent of their flowers; but at this time of year the fruit (or hips) of the roses come into their own, spangling the hedges and borders with jewel-like drops, glowing in shades from inky black to fiery orange and scarlet.
Species roses tend to be the strongest all-round performers; although not possessing the showiest flowers they often have the loveliest perfume; think of the sweet briar, Rosa eglantina, and the fresh, appley scent of its foliage after rain, or the hybrid damask, Rosa damascena, used to produce essential oils and rosewater; they have the most interesting leaves, and of course the double advantage of their hips.   Rosa rugosa – an all-round great rose - has a very distinctive, textured leaf, and large, highly perfumed simple flowers - generally in white or carmine, and the largest hips of all, like bunches of tomatoes. But my clear favourite is Rosa moyesii ‘Geranium’, a spectacular summer flowering shrub rose with perfect, vivid single red flowers and pronounced yellow stamens that in the autumn produce large, brilliant scarlet-orange elongated, flagon shaped hips. This hybrid was raised from seed at RHS Wisley in 1938 and has an elegant, compact and upright growth habit - although it is still a large plant. It looks lovely as a specimen, or in the middle of a border, but is at its best where the sun can shine firstly in the early summer on the intense flowers and later in the year sparkle on those beautiful hips. Rosa moyesii itself was originally collected near Kangding on the border between Tibet and China, in 1894 by the delightfully named Antwerp Edgar Pratt, a Victorian explorer, naturalist and collector of plants.  It must have then disappeared from cultivation as it was re-introduced by another great explorer Ernest Wilson in 1905 on his second expedition to China and taken back to his employer Harry Veitch of the Veitch Nursery, where it first flowered in 1908.  Wilson named the rose in honour of the Reverend James Moyes (1876-1930), of the China Inland Mission who seemingly had offered him ‘hospitality, assistance and companionship’. At that time the Boxer Rebellion in China had only recently been quelled, with a great loss of life, particularly amongst those from the China Inland Mission. The uprising, started in 1897 with the killing of two priests, was anti-foreigners and anti-Christian and widely seen as being caused by foreign incursions and aggression.

It is interesting to imagine the two men: the explorer and the missionary, sitting together, so far from home, talking about a beautiful single red rose.