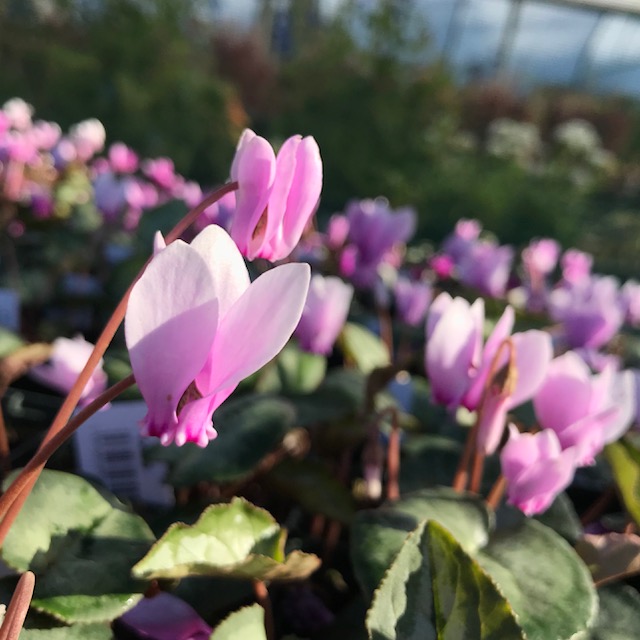 I’m quite excited to be writing about one of my favourite plants – Cyclamen hederifolium, although I have a strong suspicion that my choice changes faster than the weather. But there it is, I love those tiny flowers that pop up under trees in the autumn which Vita Sackville-West called ‘the little frightened cyclamen, with leveret ears laid back’; followed by exquisite marbled leaves (‘hederifolium’ – ivy leafed) which last through the winter and quietly disappear from view when other distractions arrive.  Now sometimes when I see a clump of those little flowers I can’t get that frightened rabbit phrase out of my mind (I’m sorry if I’ve now put that worm in your head).

As well as appreciating the sheer beauty of these plants they have a curious way of behaving once the self-fertile flowers have been pollinated: the flower stem then winds back towards the base like a tightly coiled spring and waits for nearly a year for the round pods to ripen. John Parkinson, writing in 1629, describes it beautifully as ‘the head or seede-vessel shrinketh downe, winding his footestalke, and coyling it selfe like a cable’.

Cyclamen hederifolium have been growing in England since the sixteenth century when John Gerard mentioned them in his herbal of 1597, and they were recorded as growing in William Coys garden (Stubbers in Essex) in his list of 1605.  Originally they were valued for their tubers which seemingly had many medicinal qualities but chiefly it was considered a plant to assist in childbirth.  It was so strong that Turner, in 1551, writes that ‘it is perillous for weomen with chylde to go over this roote’.  Gerard later fenced his cyclamen with sticks ‘lest any good matron accidently stepping over them should have a miscarriage’.

Early herbalists believed that the physical properties of plants were a manifestation of their potential usefulness to mankind; so that, for example, pulmonaria – or lungwort – looked like a lung and therefore should be used to treat breathing difficulties; and walnuts looked like a brain so would be used to cure head ailments.  This ‘Doctrine of Signatures’ may seem irrational to us now, but it stems from a time when it was believed that God had placed everything on Earth for the benefit of mankind and had marked some with a sign or ‘signature’ to show their use.
Gradually as understanding and knowledge of living organisms grew; and belief in the Great Chain of Being that placed God at the pinnacle, followed by angels and then man, diminished; this ‘Doctrine’ became replaced by science (although there are still some of these concepts of ‘like for like’ in homeopathy).

But what part of cyclamen hederifolium led herbalists to believe in its qualities for assisting childbirth? Could it have been that round pod waiting  by the tuber to ripen for around nine months? I think I would rather concentrate on those frightened flowers. 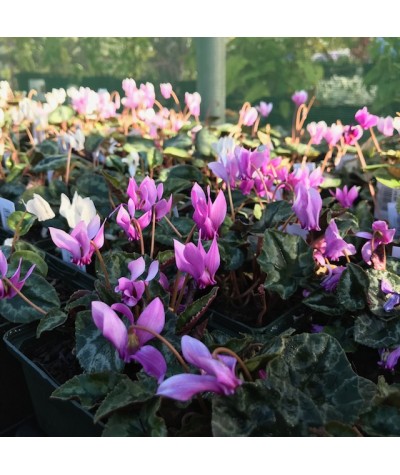