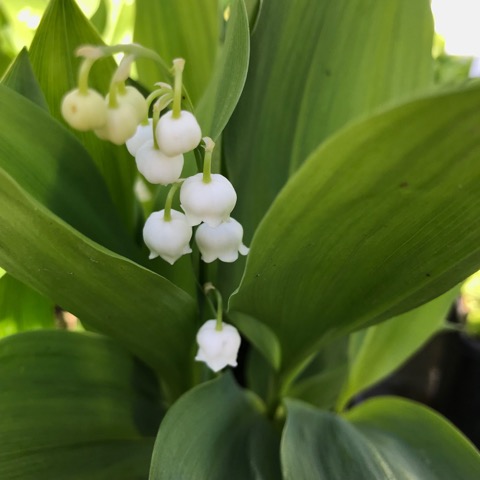 The beautiful, sweetly scented Lily of the Valley is a native flower, preferring  partial shade with fertile, well-drained, soil. Despite its delicate appearance Convallaria majalis is actually quite vigorous and long-lived (if it likes the location) with its interconnected rhizomous roots running just under the ground surface (some colonies are reported to be more than 600 years old).  These well-loved flowers have been popular since at least the sixteenth century when in 1568 Thomas Hill wrote that ‘Lillie of the Valley is a flower mervallous sweete, flourishing especially in the springtime and growing properly in woods…but now for the great commoditie and use known the same of late years is brought and planted in gardens’. The ‘commoditie’ was used as a medicine, the flowers steeped in water and then rubbed onto sprains or to ‘appeaseth the paine and griefe of the goute’ (John Gerard, 1597), or drank ‘for the cholic, a greate spooneful in the hour’ (R.L. Stevenson, 1886). Convallaria majalis, however contains glycosides (similar to those found in Digitalis purpurea, foxgloves) and is highly toxic – history does not tell us how the patients fared when treated with it! But like so many other deadly plants that were once used as a herbal remedy it is undergoing worldwide research to test for potential use, particularly with the extract Convallatoxin. But the flower itself smells very sweet and is prized for its perfume (Penhaligon’s Lily of the Valley was my mother’s favourite). The cut flowers would be sold at markets, particularly, in England for Whit Monday which is the late May bank holiday (whereas in France La Fête du Muguet - Festival of the Lily of the Valley - is celebrated on the early May public holiday, Labour Day).  To enable the bunches or pots of flowers to be fresh for market regardless of the weather, the crowns are chilled and then slowly exposed to warmth and light. In their heyday in the late nineteenth century, Rochfords in Hertfordshire pioneered the then recent development of refrigeration by applying it on a large scale to the cultivation of Lily of the Valley, forcing and chilling up to a million crowns at a time, using six freezing chambers on their ever expanding site.

Although we generally expect white flowers on our Lilies of the Valley, with the occasional pink or striped leaf rarity, it seems that as far back as the sixteenth century there were red, pink and purple as well, and: ‘The Striped and Double kinds are truly excellent, especially the last, the flowers being delightfully striped with purple and white’ (W. Hanbury, 1770). They are now lost to cultivation but maybe some sharp eyed explorer may find one flowering shyly in an ancient wood and be able to harvest its seeds.