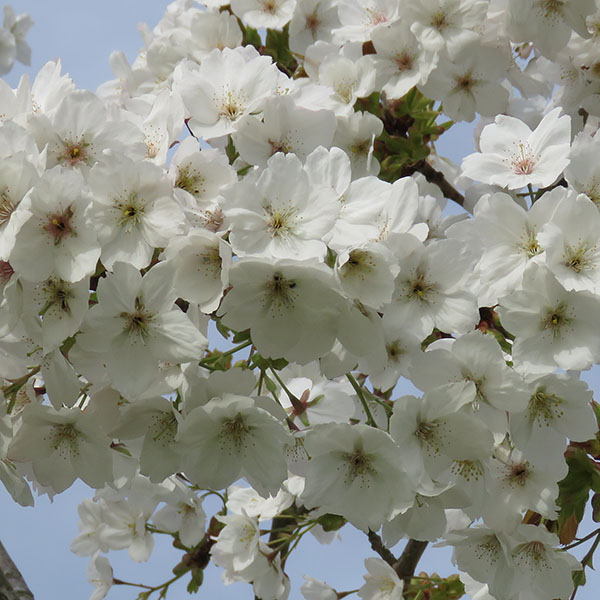 The cherries are coming into blossom now and it’s a glorious sight, worth stopping for a moment and marvelling at how spring sunshine, blue skies and looking upwards at flowers lift the mood.  Cherry blossom is fleeting and delicate, all too often ravaged by unpredictable winds and rain, but this year, so far, they are looking wonderful (and just when we need them).  In Japan, the tradition of the hanami festival is over a thousand years old (hana means flower and mi means to see) and celebrates when the court aristocrats of Kyoto would party underneath blossoms.  Now families throughout Japan picnic (and drink) under the cherries and enjoy all things cherry-themed. They consider the blossom to be symbolic of new life and fresh beginnings; the school and business year both begin in April.  (There was a dark time though when that symbolism changed its emphasis from new life, peace and optimism  to the shortness and transience of life, and sprigs of blossom were painted on kamikaze planes and the very young pilots were  waved off by girls carrying branches of blossom.) That cherry blossom is now ubiquitous in so many towns in so many countries is largely because of the obsessive pioneering work by Collingwood ‘Cherry’ Ingram who fell in love with these trees in the 1920s. He was a rather eccentric and wealthy naturalist (at one time for example, his family owned 35 Japanese Chin dogs) who loved all things Japanese and began collecting as many Prunus species and varieties as he could and shipped back cuttings to his home in Benenden, Kent where he raised many hybrids, and then redistributed trees all over the world. One of his favourite species (and mine) was the Great White Cherry (Prunus serrulata ‘Tai-Haku’), a medium spreading, free-flowering tree with newly emerging copper coloured foliage and enormous single white flowers.

Whilst taking tea with a cherry expert in Japan Ingram was shown an album of cherry tree paintings and an individual scroll of the tree that he called ‘the most beautiful of all the white cherries’ -  the Great White.  The expert told him that it was thought to be extinct in Japan, and it then became Ingram’s mission to return it from his own garden to its original home. It took 6 years, and many failed attempts to do so. One time the cuttings were sent pressed into large radishes to provide moisture on the very long journey.  When they were unpacked there were very long but rotten shoots.  It was thought that because the ship had crossed the equator the warmth must have encouraged the cuttings to grow which were then killed by the cold when they arrived in Japan. Finally the Japanese suggested sending them overland on the Trans-Siberian Railway to avoid the intense heat of the southern route, and Ingram experimented with pressing the scions into potatoes to provide moisture and nutrients.  The cuttings survived and ‘Tai Haku’ was returned to its own country.